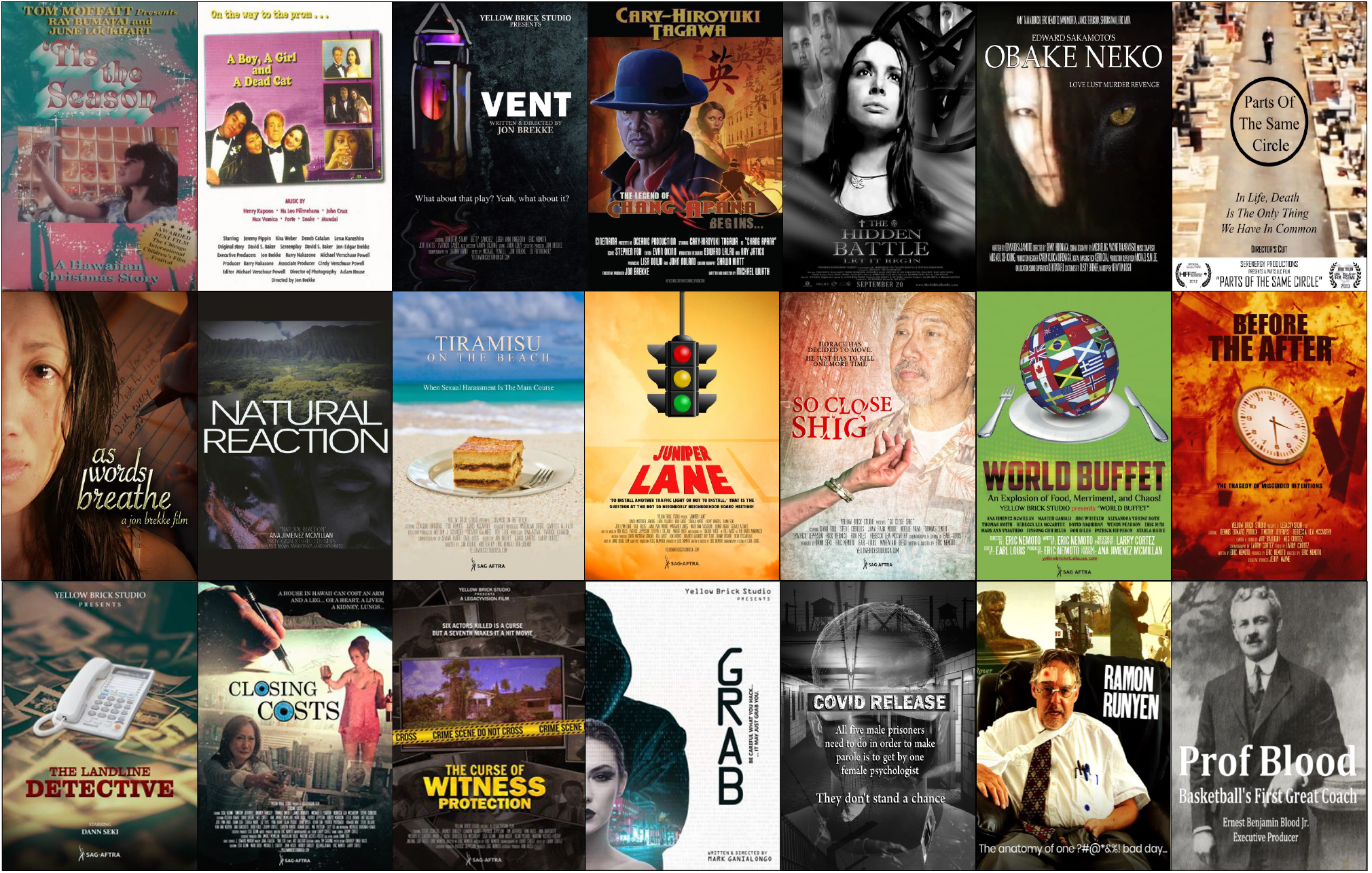 Filmmakers associated in some fashion with Yellow Brick Studio and/or LegacyVision Films have had a hand in producing or co-producing 21 movies (18 features and three short films) of varying genres. These include: 1) the holiday family special, Tis The Season – A Hawaiian Christmas Story; 2) the coming-of-age youth story, A Boy, A Girl And A Dead Cat; 3) the short film parody about off stage drama, Vent; 4) the web series concept about a true Hawaiian hero, The Legend Of Chang Apana; 5) the science fiction fantasy drama about angels battling demons for the soul of a human, The Hidden Battle; 6) the period piece tale of horror set in Old Hawaii about a murdered woman who rises from the dead as a ghost cat apparition to exact her revenge, Obake Neko; 7) the epic drama about death as being a part of the circle of life, Parts Of The Same Circle; 8) the poignant, slice of life tale of personal growth that is devoid of cliches, as words breathe; 9) the crime drama about one woman’s revenge for the murder of her sister, Natural Reaction; 10) the romantic comedy drama about sexual harassment and the differences between the male and female species, Tiramisu On The Beach; 11) the comedy about a community neighborhood board meeting becoming the battleground between the young and the old, Juniper Lane; 12) the mystery about a closet serial killer ready to retire after one last kill, So Close Shig; 13) the zany laugh riot about food, merriment and chaos at the U.N., World Buffet; 14) the heartrending tragedy told in reverse chronology, Before The After; 15) the murder mystery involving only one on-screen character who solves a 35-year-old cold case, The Landline Detective; 16) the complex conspiracy action drama that throws everyone for a loop in the end, Closing Costs; 17) the “movie about a movie” crime thriller, The Curse Of Witness Protection; 18) the anthology of short films revolving around computer hackers stealing a digital program from one another, Grab; 19) the intense interrogation of five male convicts facing the counseling wrath of a woman psychologist, Covid Release; 20) the hilarious one actor comedy about a man possibly having the worst day ever in the history of the world, Ramon Runyen; and 21) the sports documentary about one of the greatest basketball coaches of all time, Prof Blood – Basketball’s First Great Coach.

NOTE: Click on each written title for detailed descriptions of each production.