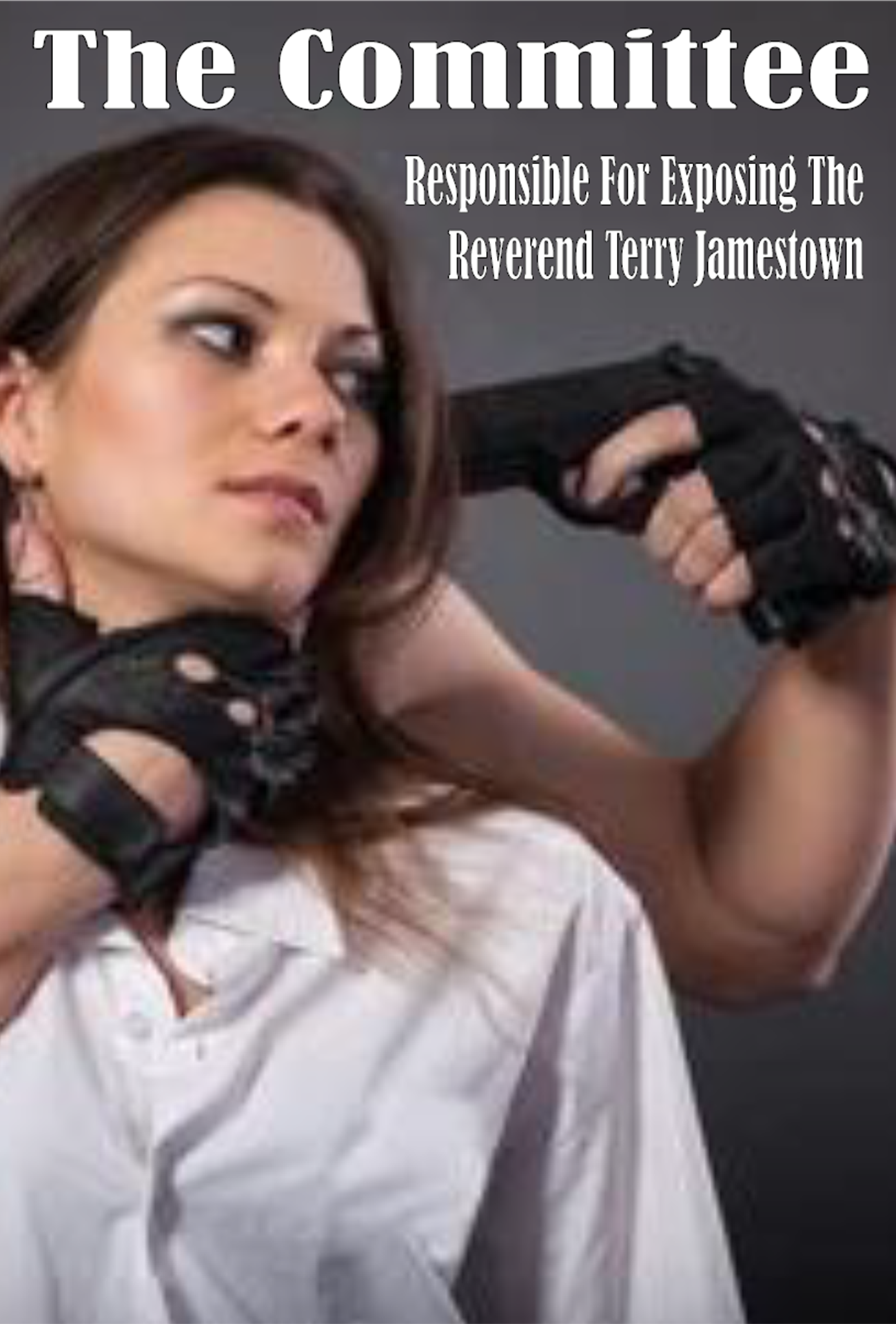 STATUS: In development. A script that was used for the stage version of this story will be used to film the movie. A primarily one location project, it is anticipated that this movie will be filmed in either 2023 or 2024. The projected shoot site is the photography studios of Hawaii Profiles owned by Rick Bernico, located in the downtown building know as the Blaisdell Hotel, located on Fort Street Mall in Honolulu.

LOGLINE: Thugs storm a psychiatrist’s office to force a famous televangelist to take pictures with a prostitute in order to blackmail him for a five million dollar ransom, but they break in before he gets there and must pass the time before he arrives, wherein everyone – captors and captives alike – begin to realize that perhaps everyone may not be who they say they are. 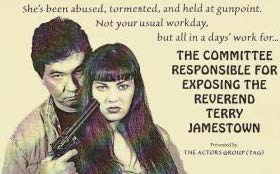 The Committee Responsible For Exposing The Reverend Terry Jamestown, also known by the abbreviated title of The Committee, was a stage play produced in 1998 by the Honolulu, Hawaii community theater known as TAG – The Actors’ Group (a portion of the promotional poster appears above). Staged during TAG’s initial years (the theater started performing in 1995) when it was viewed as little more than a creative curiosity in the local performing arts community, it nonetheless became a big hit and served to give TAG its first real statewide publicity for being an up-and-coming new theater. A glowing review in Hawaii’s morning newspaper at the time, The Honolulu Advertiser, by entertainment critic Joe Rozmiarek, put TAG on the Honolulu theater map for the first time. 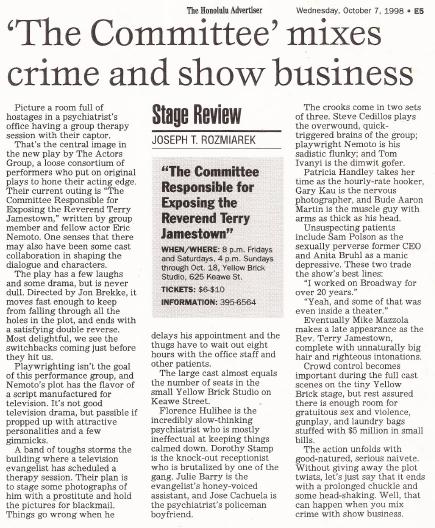 Back when The Committee was first staged, TAG operated from the theater known as Yellow Brick Studio (see the history of the development of the YBS name in the About section of this website) which was then located at 625 Keawe Street in the heart of the Kaka`ako District of Honolulu. TAG, from the onset of its creation, was a theater that was known for its intimate setting. Operating out of the ground floor of what was once a building that manufactured ice (the literally water-based kind), Yellow Brick Studio featured an extremely small performance area for which a maximum of 36 people could usually attend. Since then, TAG has moved its theater twice. Once to the Mendonca Building on Smith Street in Chinatown (2008-2010) where the seating capacity increased to 54. Another move then followed in 2010 to The Shops At Dole Cannery on Iwilei Road in the Iwilei District, where TAG’s current Brad Powell Theatre seats a maximum of 60. Even with these increases in seats, The Committee still holds the single day TAG record for an audience to view its plays, 100. For on its final day of performance in which two shows were offered, a matinee attracted 45 audience members, and a following final evening performance brought in 55. The overflow crowd for both shows had to be accommodated with additional, small, “butt-killing,” metal chairs that made the Yellow Brick Studio seem like an oversized sardine can. A video of the play (see below) was shot of one of the final performances on that last day. Though taken from a less than ideal angle given the tight crowd control, it nonetheless provides a semblance of the excitement that The Committee engendered during the early days of TAG. 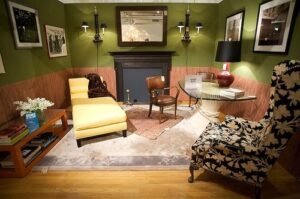 The setting is San Francisco. A woman walks hurriedly through the back alleys. In the office of Dr. Geraldine Johnson, a psychiatrist, Geraldine converses with her personal assistant, attractive Maxine, about an impending vacation they will take together to some balmy tropical destination. In walks Lucille Barker, the woman who was walking in the alleys, who reveals herself to be the assistant to the Reverend Terry Jamestown, a famous televangelist, who we learn is under such severe stress that he needs to talk to someone. Lucille wants the fact that her boss will be seeing a “shrink” to remain entirely undercover. She advises Geraldine that Terry is a bit delayed and will be arriving later in the afternoon. Geraldine’s boyfriend, Stan, enters and asks to talk to her and through their conversation reveals himself to be a cop, which Lucille picks up on. He mentions that he has to go on stakeout and Geraldine immediately gets paranoid, mentioning that he better not miss their vacation in Acapulco. Stan sheepishly smiles and tells her not to worry as he leaves. Geraldine and Lucille talk a bit more until they are interrupted by a worried looking Maxine who has opened Geraldine’s door. Then, from behind her, three men, Jimmy, Glen, and Webb, reveal themselves and the world has changed. The men are vulgar, mean, and they wield handguns in a manner that one senses that they would fire it at the women just for fun. They ask for the reverend. Lucille and Geraldine are shocked to hear that the men are expecting to find Terry there. They try to find out the men’s motives but are terrified to probe too much as the men threaten violence. When the men are told that Terry is delayed Jimmy and Glen are fit to be tied, while Webb, a guy who goes through life two beers short of a six pack, just wants to make the best of it. He asks if anyone wants anything as he could go out and get the group some breakfast. Faced with having to wait, the annoyed Jimmy tells Webb to do so, only be mindful of being detected. Given the circumstances, the men decide just to pass the time, but then Geraldine is visited by Denton, an old codger and client who has arrived very early for his appointment. Jimmy and Glen have to feign as if they are other clients and Geraldine has to do a tap dance to make Denton think that everything is okay. She tells him that they’ll all do a group therapy session which implodes when Jimmy finds play acting is not his style. He threatens to shoot Denton and tells him to shut up. Moments later, three other people working with the men appear. They are muscle man Thomas, prostitute Gloria, and photographer Richard. They each complain about the delay and worry about whether this is going to turn out all right. After more time of waiting and everybody getting on each other’s nerves, Webb returns with food and his dimwit brain announces that he didn’t get enough for everybody. Jimmy and Glen are enraged when they find out that Webb used his credit card to pay for the food. Then, as if the day didn’t have enough challenges, another client of Geraldine’s, senior citizen Deborah appears, but this time there is no attempt at trying to disguise things for her. Glen threatens to kill her if she speaks and Deborah gazes around in shock. Through eventual dialogue it is revealed exactly what are the intruders’ plans. The band is sponsored by the “committee,” and they will force Terry to take intimate photos with Gloria and threaten to post them on the Internet if the reverend doesn’t pay them five million dollars. Lucille is shocked and infuriated but there’s nothing she can do for the men, aggravated by the delay and the fact that everything seems to be going wrong, start to take out their anger in vicious ways. Glen savagely assaults Maxine by throwing hot coffee on her and then dragging her bodily along the floor to “mop of the mess.” The violence is not limited to the captives. Thomas, angered by Gloria’s mouthing off, takes a switchblade and threatens to scar her face permanently, and leaves her in a crying heap. But in this melee, however, Geraldine manages to text an SOS to Stan. At last, Terry arrives, and he is immediately held against his will by Thomas and Webb. They take him into another room where the flash of Richard’s camera lets us know that Gloria is doing the dirty deed with him. Later, as everyone waits around, Lucille returns with a bag full of money, having been forced to retrieve the required five million while Terry is still held captive. But just as she hands it over to Jimmy, Stan bursts in and a hail of gunfire ensues which leaves Jimmy and Glen dead, and the others pointed to a corner with their hands up as Stan calls in the incident. Wary of what the publicity that this will cause Terry, Lucille begs Geraldine to ask Stan to let them go. She even offers the bag of money. Eventually Geraldine and Stan accept and tell Lucille and Terry that they were never there as the two leave the chaos behind. Later, in sunny Jamaica, we find that everyone except Lucille and Terry are celebrating. It was all a ruse. The entire group actually form the “committee” who teamed up to get Reverend Terry Jamestown to give up five million dollars and feel good about it. As they all join in on a conga line and dance to the tune of Harry Belafonte’s “Banana Boat Song,” they reveal themselves to be a gang of con artists and grifters who travel the globe setting up famous people and robbing them of their money. 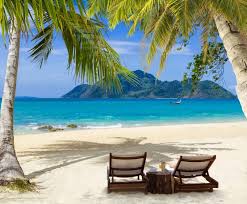